The Kelly criterion is used to allocate a fraction of capital to a particular investment, given a payoff amount and an estimate of success, such that the growth rate of capital is maximized while simultaneously avoiding bankruptcy.

This method can be used to systematically allocate assets over a variety of investments with heterogenous risks. It is also It has been mentioned that some investment managers use the Kelly Criterion or variants of it to allocate their capital across their investment portfolios, although it is not clear if this has led more success than those that have not.

In this article, we will review how to compute the criterion by replicating the results of a research paper. We will then apply it to another use case involving stock options.

Intuitively, the Kelly criterion attempts to maximize the logarithm of expected return. In the case of continuous returns, we can express expected return as \[ G(f) = \int \log(1+fs) F(s) ds, \] where $F(s)$ is the probability of observing a return of $s$ and $\log(1+fs)$ is the logarithm of the growth rate. $f^*$ is the fraction of capital to invest that maximizes growth while avoiding bankruptcy and can be computed using numerical integration and optimization methods.

Values of $-1 \le f < 0$, can be interpreted as taking a fractional short position. While $f \le -1$ indicates a short position using leverage. The opposite is true for positive intervals. $0 \le f < 1$ correspond to fractional long positions and $f > 1$ indicate long positions using leverage. Using these values to gauge investment size ensure that the investor maximizes growth while avoiding bankruptcy in the long run.

In Rotando's and Thorp's paper, The Kelly Criterion and the Stock Market, the authors compute $f^*$ for investing in the S&P 500. They begin by first collecting historical annual return data from 1926 to 1984 and fit the results to a Gaussian distribution. They estimate $\hat{\mu}$ as 0.058 and $\hat{\sigma}$ as 0.216.

The modified Gaussian distribution is shown below with the boundaries and values of $A,B$ and $h$ marked as dashed lines. 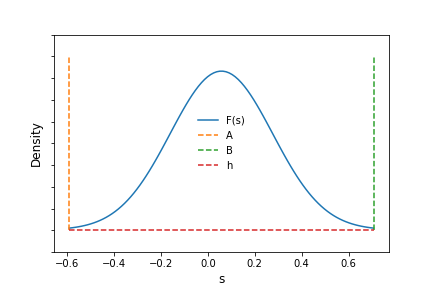 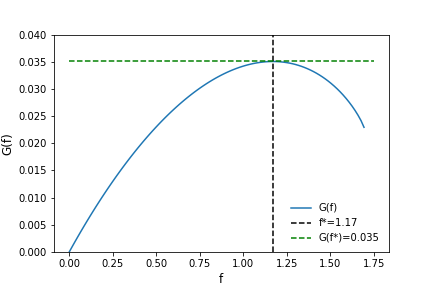 Now that we have an understanding of the criterion and how to compute f, let's apply it to other investments and examine how the criteria changes with a different $F(s)$. To do this, we will replicate the example above using annual return data for the S&P 500 from 1928 to 2020 and changing $F(s)$ from a Gaussian to a Cauchy. The figure below plots return data as well as the estimated $F(s)$ for the Cauchy over the domain $(-1,1)$. 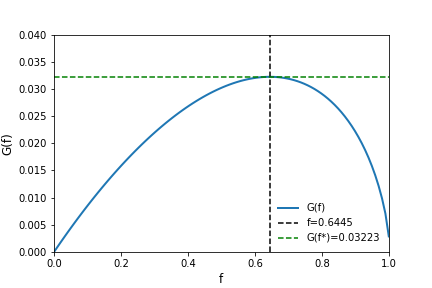 Clearly, the choice of $F(s)$ plays a large part in choosing $f^*$. A Cauchy choice leads to an investment size that is 45% smaller compared with the Gaussian choice presented in the paper. In addition to this, one should also consider what long run return really means. In the paper and prior articles, empirical loss probabilities are presented that show in the first 5 years of an investment, losing material amounts of an investment have occurred relatively frequently. This has led many users of the method to think of $f^*$ as an upper bound on the maximum amount of investment one should consider making.

The Kelly Criterion has a rich history and has been incorporated into numerous investment strategies and decisioning processes. For more on this, the text The Kelly Capital Growth Investment Criterion presents a comprehensive survey of the research and thinking that has developed since the original work was shared.