With the playoffs in full swing, I thought some analysis of the scoring dynamics in basketball would interest readers, so I've put together a comparison of two methods for predicting a game's winner - one developed by a serious sports fan and the other developed by myself, in collaboration with Aaron Clauset.

In 2008, Bill James published a formula for determining when a lead is safe in a basketball game, which I'm calling the Safe Lead method. Bill's calculation is as follows:

Why does this formula work? And perhaps more importantly, how accurate is it? In this post, I'll shed some light on the accuracy of Bill's formula, and I'll also compare it to a method I've developed, which is based upon viewing a basketball game as a stochastic process.

For this analysis, a data set that describes when baskets were scored, and by which team, during a game, is required. Both the NBA and ESPN have made available, high resolution, play-by-play data of nearly every basketball game played in recent history. I've written a Python script to download and extract play-by-play data from ESPN, which can be found here.

I'm using data from the last 10 seasons of the NBA. In total, this is roughly 12,000 games and 1,200,000 scoring events (I'll define what a scoring event is shortly). For my analysis, I'm using a Python library I've created called SportsSciPy.

Basketball as a stochastic process

When the game of basketball is viewed as though it were a stochastic process, we can model the probability of the home team's score increasing by \(p\) points as the joint probability of observing a scoring event, the home team winning the event, and the event being worth \(p\) points. Mathematically, this can be expressed as \[\begin{aligned} \Pr(\Delta S_{home} = p) = \Pr(\textrm{event})(t)\Pr(\textrm{home team scores})\Pr(\textrm{points = }p). \end{aligned} \] I've used a similar model in previous research on modeling scoring dynamics in online games. In what follows, I'll analyze the data non-parametrically with respect to each of the three components introduced above: timing, scoring, and points. A paper that performs a more rigorous and parametric analysis of what I'll be presenting below can be found here.

To get started, we'll begin by studying the timing of scoring events. A scoring event is defined as the total number of points scored during a second of official game play. This means a series of foul shots scored in the same second of play are aggregated into a single event worth a point value equal to the number of successful shots made by the player. The figure below plots the probabilty of observing a scoring event at each second of a game. 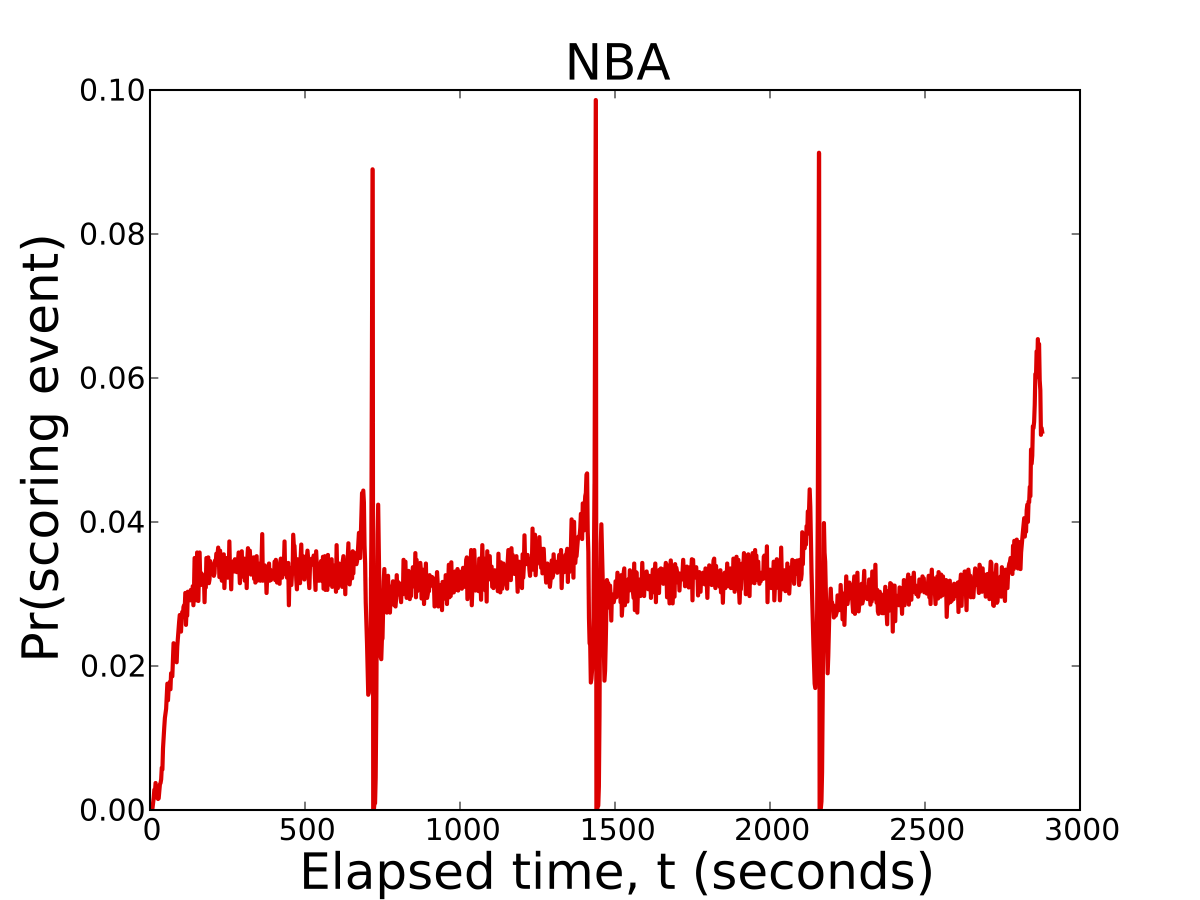 To fans, this figure should agree well with their intuition and understanding of the game. The 4 spikes in scoring at seconds 720, 1,440, 2,160, and 2,880 are the last seconds of play in each quarter of the game. In the first quarter, the probability of scoring is nearly constant once teams warm up and find their rhythm. Scoring in the second quarter steadily increases going into half-time. In the second half, scoring occurs with relatively constant probability, with the exception of roughly the last 30 seconds of the game, where teams pick up tempo to try and secure their win or reduce their deficit.

The figure and inset below plot the distribution of inter-arrival times between consecutive scoring events as well as their correlation. They tell us about two important features of the game. First, there is roughly a 30 second delay between consecutive baskets and second, that events are virutally uncorrelated. 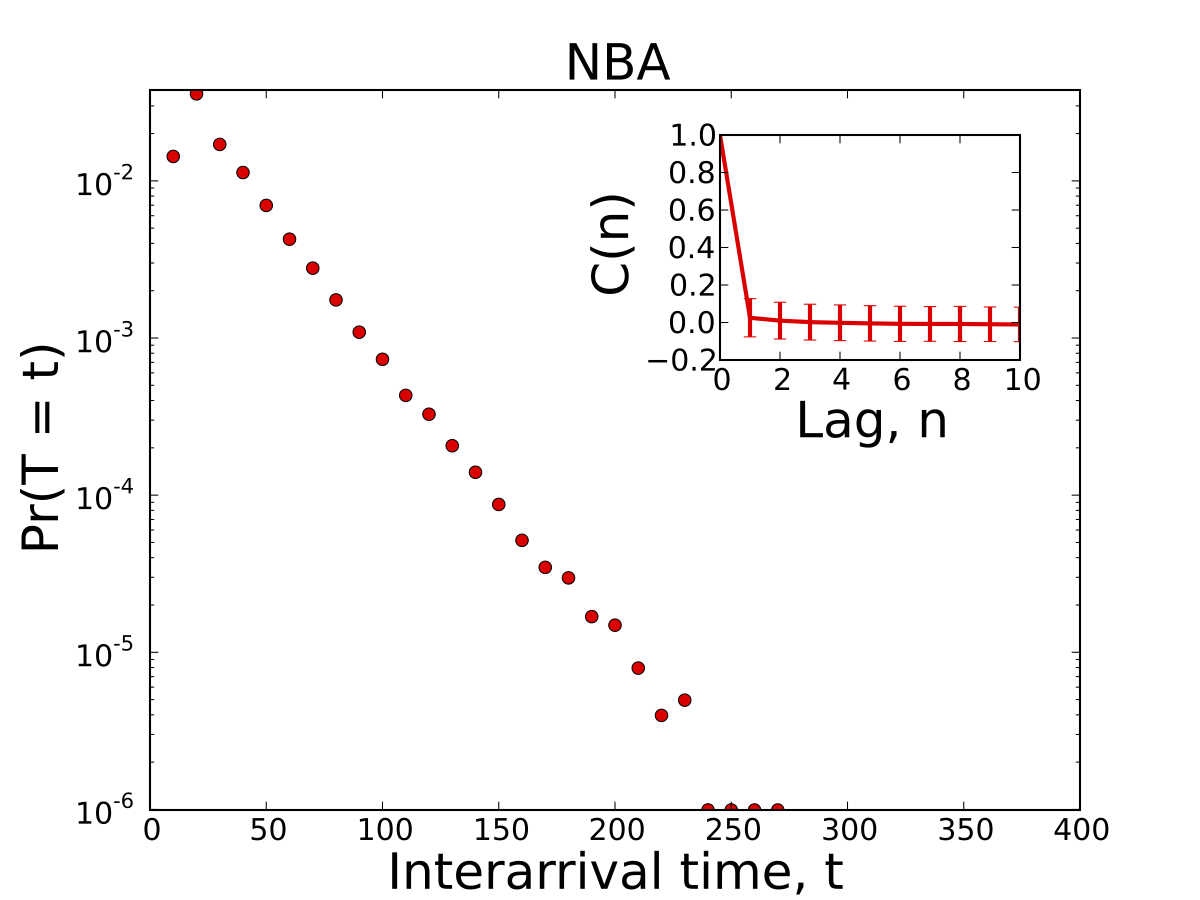 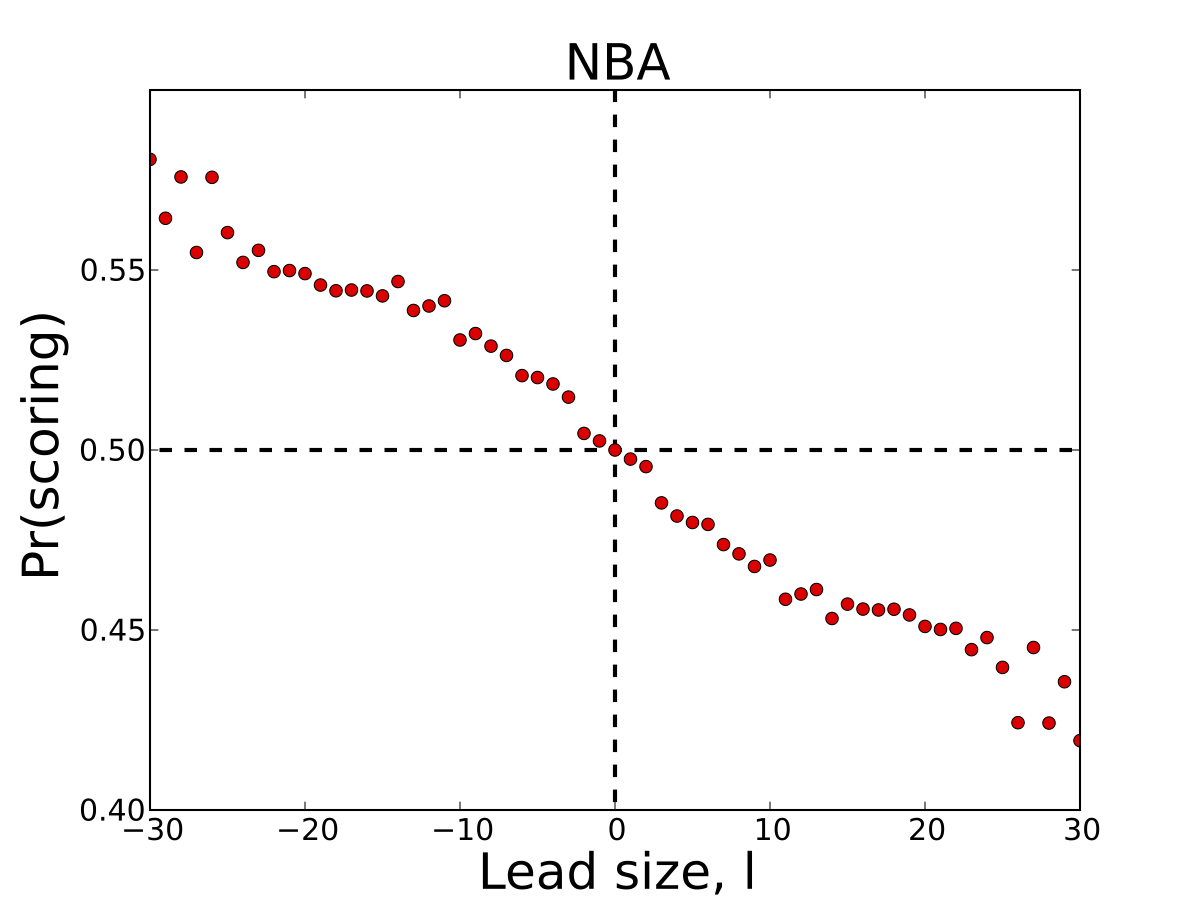 Perhaps one of the most interesting features of basketball is that the probability of scoring again decreases as a team's lead increases. Some have spectulated that this negative correlation is due to the possesion change after each successful event. However, I have found that in other sports with the same rule, such as football, the probability of scoring increases with lead. If you have an opinion or some insight that may explain this phenonmenon, please share in the comments of this post.

Finally, we'll briefly examine the distribution of points scored over all the games in our data set. As expected, the majority of scoring events are worth 2 points. 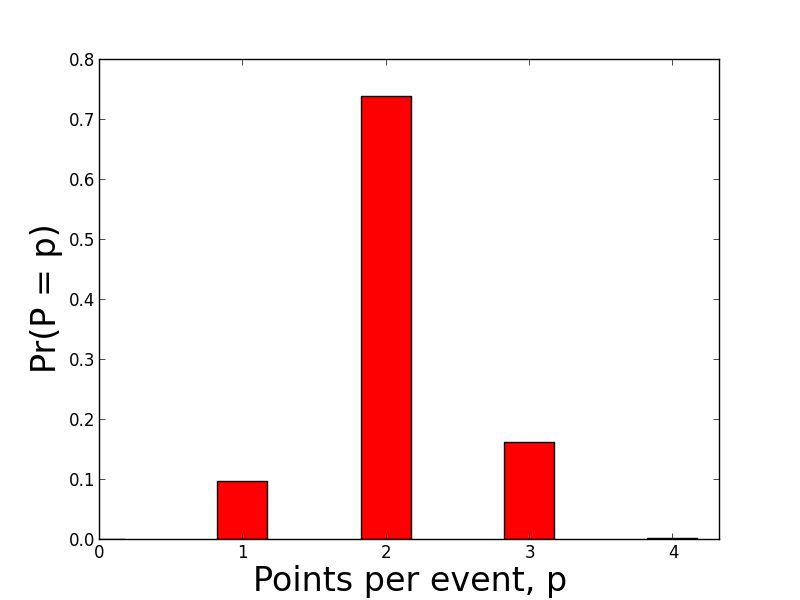 Given \(P\), all that is required to compute the probability of one team winning, given the game's current state, is to estimate the number of remaining events in the game, \(n\), raise \(P\) to this power, and then sum over all states that are either greater or less than 0 (depending on team). Mathematically this is equal to

To measure the performance of the Markov chain's ability to predict a game's outcome, I've computed the timing, scoring, and points distributions using 3/4 of the game data and then predicted each remaining game's outcome as a function of cumulative number of scoring events. The figure below plots the model's prediction performance, using AUC, which can be interpretted as the accuracy of the classifier, as a function of cumulative events. If we assume a scoring event every 30 seconds, then the classifier operates at roughly 75% accuracy after 15 only minutes of play, and continues to improve as the game progresses. 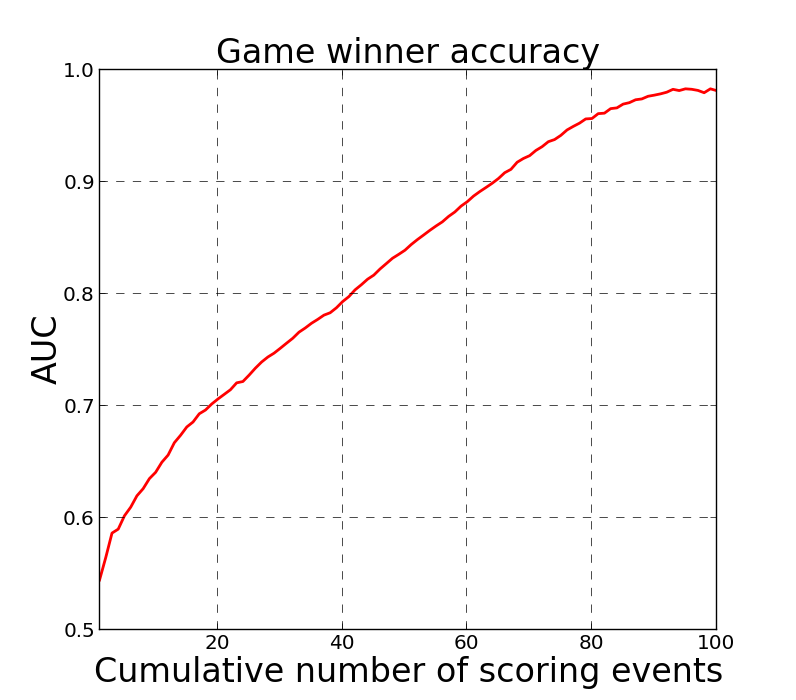 So how does our Markov chain method of estimating a game's winner compare to Bill James' Safe Lead method? First, let's take a closer look at what Bill's method is telling us.

The figure below plots the AUC of each method as a function of time in the last quarter of the game. I've left off the first 3/4 of game time because the Safe Lead method doesn't do any better than chance. 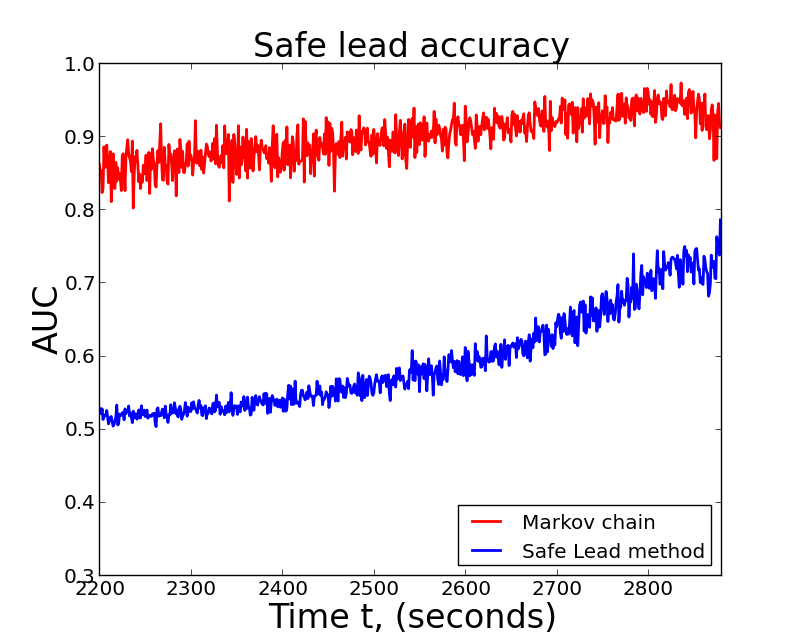 In this post, I've presented a probablistic model of scoring dynamics in basketball and used it to construct a Markov chain that can make predictions about observing different types of scoring events in a game. I've also analyzed Bill James' Safe Lead method, presented a comparison to a Markov chain method, and showed that it has higher accuracy than the Safe Lead method.

For fans who like to watch streaming statistics of scoring events, I've created a web application, onthespotsports.com, that provides real time predictions for a variety of scoring events including the ones reviewed here. The site is viewed best on up-to-date versions of Chrome, Firefox, and Safari.